There are many attractive aspects to life in rural India, the area itself is beautiful and colourful, the people here have a real sense of community and overall seem fairly happy with their lot, life here is a lot simpler. However, alongside these romantic notions there's some things here which also make life kind of tough.

The farm work people to do here can be back breakingly difficult and can cause serious health issues. Farm work here doesn't involve machinery, instead all the crops are sown, fertilised and harvested manually. This work involves an awful lot of bending over, heavy lifting and other repetitive movements - there are at least 3 extremely old ladies who walk with hunched backs in the village due to a long life of labour and they still work even today. It's sad to say that some of the children I teach may well end up like these elder ladies. 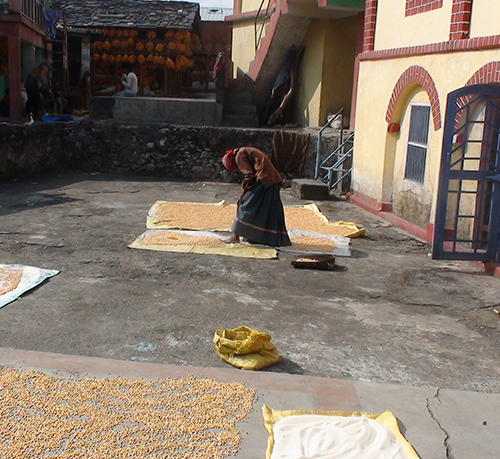 People don't have much money here, half of rural India live below the poverty line. Sure, they have enough to get by but it's a hand to mouth existence. Having no money for the large part doesn't seem like the end of the world but savings are important for a number of reasons:

I've heard of a couple of pretty horrible issues since I've been here, obviously this stuff can happen anywhere in the world but it seems like it's a little more common here.

The first is domestic violence which, in the two stories I've heard of the violence seems to be associated with alcoholism. It's very sad and the violence sounded severe.

The second is the kidnapping of children by men who live outside of the Himalaya's. No child at GEMS has fallen victim to this, however, there have been stories of men trying to get GEMS children into their cars and it would be simple to get away with kidnap in this area. Children are encouraged to walk in large groups when along the road side.

It would be unfair of me to not first point out that infrastructure in this area is definitely heading in the right direction and it is a lot better than I expected it to be. Local villages have access to clean water and they electricity. There are no telephone lines but people just use mobile phones.

However there are some things which I would consider quite basic and still missing:

Although I believe investment in education and technology is the only way in which these peoples lives can be improved I hope at the same time that western culture does not encroach too much on Sainji, I think our (the west) lifestyle does not have much of a sense of community and also has a bad habit of commercialising tradition. I hope that there is a way to reconcile the benefits of a good education, infrastructure and technology with the himalayan lifestyle in Sainji.

While opportunities are far fewer for every child in rural India it can be even more difficult for the girls of the region. Lori, the head of our school explains it better than I can:

"The general sentiment among poor families in India is that one should not invest too heavily in a daughter because she will only get married and go to live with her husband’s family. This perception is noted at Garhwal English Medium School (GEMS). While we have 162 children enrolled in our school, only 51 are girls."

Girls in fact, are taken out of education early to help at home. We're currently running a sponsorship programme for the girls at GEMS, you can find out more about it here: gemssponsorshipprogramme.wordpress.com